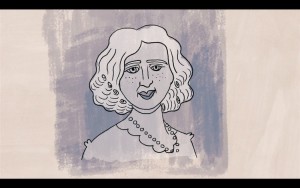 Sally came up at the trial, but only in a minor way in trying to get Brinkley’s early life story straight. It’s not true that Sally doesn’t appear in The Life of a Man; it is true that she doesn’t appear in this film. We’ve withheld information about her both because it didn’t seem too relevant and because keeping it from you until this point only adds to the sense that Brinkley’s life story – and thus, this film – has been pretty untrustworthy.