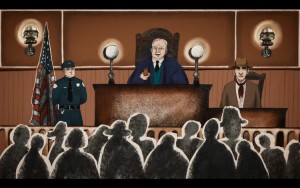 It is true that the judge decided in this case that patients would not be allowed to testify, though not quite as immediately as we’ve portrayed it:

“Judge McMillan took a long night to think it over. Next morning he announced his decision. ‘Gentlemen, I am of the opinion that the specific instances of malpractice couldn’t be shown, nor could specific instances of good result obtained by [Brinkley] be shown… [If the attempt were made], it would open up an unlimited field of evidence in which, maybe, seventy five or a hundred patients might appear and, for some reason or other, claim they had been benefited, and seventy five or a hundred might appear on the other side and claim they had been mistrated or hadn’t been benefited, and the first thing you know the drial would deteriorate from a trial of issues before the court and jury to one of prejudice and passion and feeling… I don’t think that kind of evidence is admissable'” (Brock, 239-240).