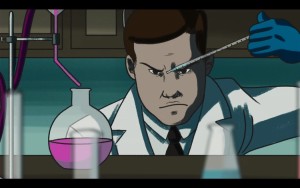 This speech by Brinkley, in which he announces his wonderful new breakthrough, is an amalgamation of many different moments. We’re condensing a lot of things together here for flow and simplification.

He stopped offering the goat gland surgery in 1933 (not in 1937 as suggested here), and offered instead “glandular preparations” or “commercial preparations” (whatever that means) instead. But we’re making it seem as if these “preparations” were known as Formula 1020, which they weren’t; Formula 1020 was a different treatment. Basically, Formula 1020 was colored water given to all post-operative patients and was meant to increase a patient’s white blood cell count. Really, it was just one of many quack remedies sold by Brinkley; we only bring up Formula 1020 because it becomes important in the libel trial later.

Also, notice that now all of the sudden the goat glands aren’t just for impotence? We’re finally sharing the information that the goat gland surgery was acually a miracle cure-all good for almost anything that ails you! A good sample of the conditions Brinkley claimed to cure with goat glands can be found in Shadows and Sunshine, John R. Brinkley, published by John R. Brinkley, Milford Kansas, 1923 (or later in the film, at the end of the first day of the libel trial).

"Brinkley testified Thursday that he had abandoned in 1933 use of the goat glands in favor of a commercial preparation" ("Goat Gland Injections Berated By Doctors in Brinkley's Case," Owen W. Clements, Valley Morning Star, 25 Mar 1939, Sat, Page 3) "Brinkley had been charging patients $100 for his post-operative injections of Formula 1020" (Lee, 209). "Before leaving the stand, Petermeyer was asked to explain why his boss sent prostate patients home with extra ampules of Formula 1020 – the first mention of what would become a bitter issue at the trial. The witness explained that this medicine was a personal creation of Dr. Brinkley's, designed to fight infection by boosting the patient's white blood cell count" (Brock, 237). "Dr. Brinkley . . . says that in more than 3,000 operations performed . . . he has found it effective in twenty-seven types of disease" ("Gland Transplantations Now Used By Japan To Put Aged Infirm Back To Work, High Class Goat Prices Soar," Springfield Missouri Republican, 16 Mar 1923, Page 10).