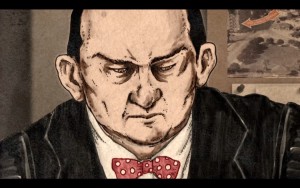 The Federal Radio Commission had its hands full during this time dealing with Brinkley and his legions of border radio imitators. They received hundreds of letters of complaint about XERA and its ilk. They wouldn’t have needed a complaint from Fishbein specifically to take action, although some sources suggest that it was once again the relentless pestering of Fishbein that forced the FRC to take action.

Brock for example said of this period: “All the while, Morris Fishbein was watching, metaphorically at least, through binoculars” (166). Mainly though we wrote this scene because in earlier versions of the film, audiences had forgotten who Fishbein was when he re-enters the story for real in the third act.

Oh also we made up the name Doris.