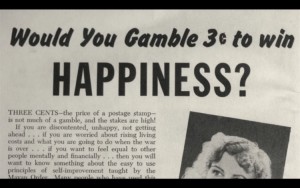 This ad is for a line of products by a charlatan named Rose Dawn who looked a lot like Mae West.

“Border performers were rated by how much mail they could ‘pull.’ Rose Dawn, Brinkley’s personal astrologer, became ‘one of the most successful mail pullers in border radio history.’ Rose would read listeners’ horoscopes, pray for a radio fan, or give lovelorn advice for $1 per service – with no discounted rates for a combination thereof. Rose also offered a book that would make a personality ‘blossom like a flower’ or vials of perfume that would affect one’s own and other people’s behavior in an extraordinary manner, for $1 each. Some wags began referring to [Del Rio] as Dollar Rio. Rose was married to Koran, a missionary for an occult society called the Mayan Order, and the couple was ‘an ethereal sight on the streets of Del Rio as the glided past gawking onlookers in their pink Chrysler trimmed in green with orchid wheels” (Lee, 161).