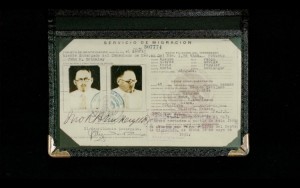 This is a reproduction of his real visa. But here’s an interesting omission:

The citizenry of Milford were none too pleased with Brinkley’s decampment. It didn’t help that he took nearly all his employees with him, along with “every stick of furniture, all the equipment, every chandelier and sconce Brinkley had been able to rip out before bringing in the wrecking ball. The only thing he left behind was a massive pile of debris” (Brock, 193).

“Enraged citizens, whom the local newspaper described as ‘almost thunderstruck’ over this development, chiseled Brinkley’s name out of the cornerstone of his building and painted his huge campaign billboard at the edge of town yellow. Their feelings were further inflamed when John later bulldozed his buildings for tax purposes . . . His departure would leave Milford ‘hardly more than a memory'” (Lee, 168).