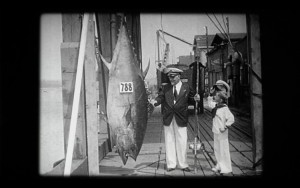 This bizarre 1934 film is a professionally filmed record of a three-month journey aboard the Brinkleys’ yacht (named the “Doctor Brinkley,” of course). It is seventy-five minuts long and culminates with Dr. Brinkley’s 788-pound tuna catch, which broke the Western Hemisphere record held by Zane Grey.

The film also includes a visit to Brinkley’s birthplace in Beta, NC. We loved this film so very much, in part because it contains a reference to the idea of the “fish story,” or “big fish story” – a colloquial term for an outlandish and far-fetched story full of lies… or a story that’s just too good to be true.

On the fishing trip: Fowler andCrawford,  54. On the "fish story" idiom: http://idioms.thefreedictionary.com/fish+story