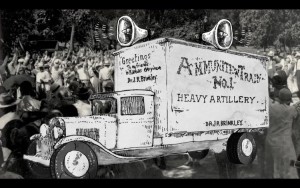 The sound truck was actually used in Brinkley’s 1932 campaign (not in 1930), and it is documented that Huey Long was using sound trucks, to great advantage, as early as 1930. So no: Brinkley didn’t invent the sound truck. But he may have invented the idea that the sound truck would play pre-recorded speeches and not just warm-up music. We spent a long, long time on this note before deciding to move on. The point is, he either invented it, or he was a very early adopter/pioneer.

"Goat Gland Doctor Making Circus Campaign for Governor" Ames Daily Tribune, 6 October 1932, Page 8. "The first experiments with sound trucks were carried out by Huey Long in his 1930 campaign against Joseph E. Ransdell for a Louisiana seat in the U.S. Senate . . . The sound truck operator preceded him along the campaign route, announced his impending arrival, and played music to gather a large, expectant crowd." ("Forced Listening: The Contested Use of Loudspeakers for Commercial and Political Messages in the Public Soundscape," Ronda L. Sewald; in Sound Clash: Listening to American Studies, a special edition of "American Quarterly", Kara Keeling, Josh Kun, eds; Johns Hopkins University Press, September 18, 2012; page 323) cf., "Brinkley's campaign for the governorship was going full bore by June, bringing with it more tireless experiments in self-promotion . . .The biggest of these was a gaily painted Chevrolet truck called 'Ammunition Train No. 1.' It was equipped with a tailgate stage and loudspeakers, and surmounted by a 'five mile horn' . . . Though he no longer owned it, KFBI in Milford – successor to KFKB – gave him generous airtime, and one day this ping-ponging from stage to studio to stage sparked his next eureka moment. 'I just realized,' he wrote one of his advisors, 'that I could put a talking machine on my truck and it could stop in a lot of little towns where I would not appear in person to make speeches and, of course, the truck would attract the crowd and the man in charge, after the crowd was collected, could play some of the records and I could make a speech or two from the record . . . I think it is the biggest idea I have had. What do you think?' Thus the sound truck entered American politics..." (Brock, 184-5).