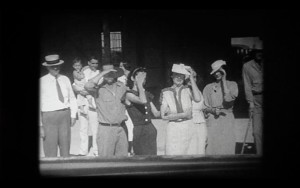 We don’t think Brinkley said anything like this; we thought his talking about “income inequality” would make contemporary audiences feel he was ahead of his time. We also made up the 4% statistic. This sentiment and the “every man a king” slogan we borrowed from Huey Long.

Generally, in this scene we are trying to demonstrate how Brinkley drew on populist themes in his campaigning. Brinkley loved to cast himself as a representative of the common man, but his opinion of the New Deal and everything it stood for… varied, depending on who he was talking to. His populism was calculated and strategic, not a bedrock principle.

"Every man a king" / income inequality: http://www.americanrhetoric.com/speeches/hueyplongking.htm Overview/background on populism and "Brinkleyism: "The Wizard of Milford: Dr. J. R. Brinkley and Brinkleyism," Francis W. Schruben, Kansas History, Winter 1991. One example of Brinkley's attitudes toward progressive politics: "'John held a news conference in which he disclaimed interest in politics and criticized the Roosevelt Administration for excessive spending. When asked his opinion of Senator Huey Long's 'share the wealth' plan, he responded, 'I am just like any other very rich man'" (Lee, 195).