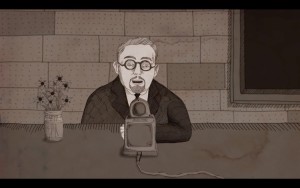 This radio broadcast is actually from later (c. 1939) and was recorded at a different radio station (XERA) Brinkley built in Mexico. We know of no extant recordings of KFKB broadcasts. We’re doing our best to edit this broadcast to make sense in 1923, and to make Brinkley seem to be talking about impotence and the goat gland cure. In fact he’s talking about a prostate operation which later became a specialty of his.