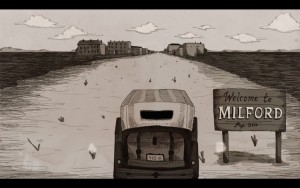 We invented these numbers and they are probably highly overstated. Surprisingly, the 1930 census lists Milford’s population as only 300. Our sources suggest uniformly that Milford grew a lot during the 1920s because of Brinkley’s fame and that 1930 should have been close to the height of Milford’s size and prosperity. Perhaps Milford “grew” from just under 200 to about 300? We don’t know, and we spent way too long trying to get Census data for Milford in 1920 before deciding that this was a great example of getting way too picky about a minor detail. (See also: notes 24 and 62 on Milford’s population.)