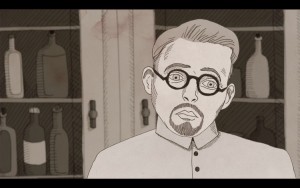 A reasonable person might think that we should include the following background information somewhere in the course of this film, probably pretty close to the front…

Since the late 1800s, good scientists, bad scientists and charlatans had been experimenting with and/or selling the transplantation of testicles as a means to “rejuvenate” old, sick or impotent people. They were trying all kinds of stuff that would take too long to get into here. Suffice it to say that people like Charles-Édouard Brown-Séquard, Eugene Steinach, Harry Lydston, and Serge Voronoff were certainly important influences on Brinkley. Brinkley himself cited the work of these “pioneers” in his own writing, especially Lydston who he admired greatly.

Brinkley and Voronoff specifically had quite a rivalry going. It is unclear from newspaper records which of them was the first to successfully transplant the testicles of animals into humans (or say they had). Voronoff used monkey glands, and Brinkley goat glands. Voronoff was at least as famous as Brinkley, at least in Europe. Brinkley denigated him at every opportunity.

Glands and hormones were hot stuff back then. For example, Dr. Frederick Banting discovered insulin in 1921; two years later, he was awarded the Nobel Prize. So while our film essentially makes it seems as if Brinkley all alone had this brilliant idea, he was really riding a wave. Like all good quacks, Brinkley took something real from the scientific zeitgeist, distorted it, and sold it to a public primed to believe him in part because they had been hearing about some of the same ideas in the papers.

A lot of the things we say or imply Brinkley “invented” he didn’t exactly invent, is our point. Which isn’t to say he wasn’t a genius, or an early pioneer of many things. It’s just that the “Great Man” theory of history really falls apart when you’ve done enough research.