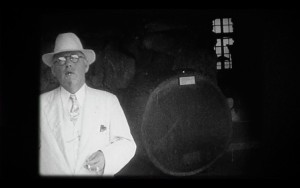 The name of the protagonist is not John Romulus Brinkley. Brinkley’s middle name was Richard.  He claimed to have been born John Romulus and said it was later changed to John Richard, either because a preacher said it was a heathen name or because his schoolmates made fun of him (he told different versions of this story).  Logic suggests he invented the Romulus story – given that he’s named after his father, whose name was John Richard – but we decided to use Romulus exclusively in this film because (1) it’s way more awesome, and (2) it underscores the fact that for whatever reason, Brinkley liked to identify himself with the mythical founder of Rome.

A letter Brinkley wrote to his son in 1928 told the "schoolmates" story (Lee, 2) and Wood tells the "preacher" version (20-21). According to Lee, there's no birth certificate for Brinkley, because Jackson County didn't record birth certificates for children born outside marriage (246).