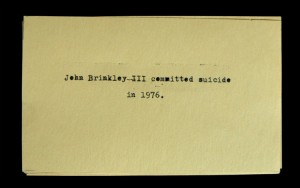 “. . . finally overwhelmed, took his own life. On October 23, 1976, police found the body of John R. Brinkley III in his home. A 9mm German Luger was in his left hand. A bullet had pierced the left side of his head and exited behind his right ear” (Lee, 235).

But! Remember Brinkley had daughters, too, with his first wife. We’ve let this scene play out as if it’s the end of the family line, because it’s poetic and tragic. But that’s not really true.