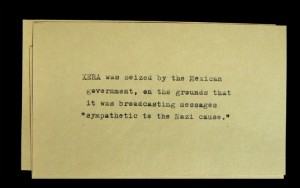 True; according to the Associated Press, Mexican officials claimed that the station was broadcasting Nazi propaganda. Minnie Brinkley denied the Nazi affiliation. Historians have pointed out that whether or not the Nazi claim was true, the United States and Canada finally agreed to share use of the airwaves with Mexico – if the border radio stations were shut down. So there were other incentives for this action regardless of the Nazi connection.