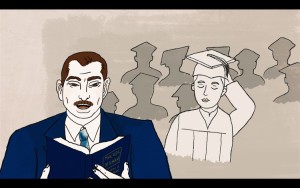 “On May 7, 1915, the Eclectic Medical University of Kansas City presented him with a certificate signed by its president, Dr. Date R. Alexander. To become an alumnus of E.M.U. (later described in court proceedings as ‘vague, obliging and long defunct’) cost Brinkley one hundred dollars and got him licensed in eight states” (Brock, 25).