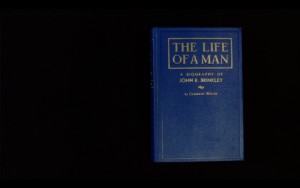 We have finally come full circle: the way that The Life of a Man functioned at this trial was a major source of inspiration for the entire structure of this film. We’ve represented the way the book worked in the trial pretty accurately in this scene, with Brown reading the more absurd portions out loud and forcing Brinkley to respond to them, Brinkley trying to say he doesn’t even know what’s in it, and eventually admitting he paid for it and published it himself as a sort of promotional item.