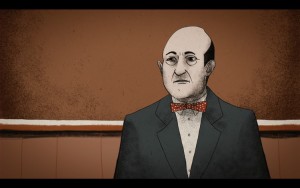 Unsurprisingly, Fishbein’s testimony was considerably less dramatic than it is portrayed here (Brock describes Fishbein on the stand as a model of “serenity and reason”). But we needed to really lay out what a quack is and how he operates during this trial, and it seemed fitting to let Fishbein let loose about it. The very last line of this monologue (“he is a tumor on the body of science”) was taken directed from his testimony, however.

"When late in the week Morris Fishbein took the stand in his own defense, he was a hyperactive model of serenity and reason . . . Questioned by Brown, he sketched the august history of the AMA and his own credentials as a quack buster. Then he was asked how he felt about Brinkley. 'My feelings would be, from a scientific point of view, quite negative,' Fishbein said blandly . . . A vendetta? That was absurd. Rather, one might view his campaign against 'Mr. Brinkley' as a sort of surgical procedure, 'like dissecting away a malignant tumor from a normal body, and off the body of science'" (Brock, 242). "The Case of Brinkley v. Fishbein", Journal of the American Medical Association, May 20, 1939, Volume 112, No. 19, pp. 2058-9.