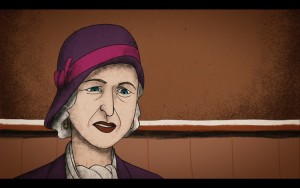 The name of the real chemist who testified that Formula 1020 was just colored water was Dr. Eugene W. Schoeffel; we re-cast him (and a few other minor characters throughout the film) as a woman because… well, because we wrote barely any parts in this film for women, and Penny thought it was important to do what we could to add a few female voices to the film, so long as doing so didn’t seem too historically inaccurate.