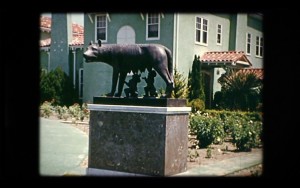 This statue is a replica of the iconic “Capitoline Wolf,” depicting future founders of Rome Romulus and Remus suckling at a wolf’s teat. The image was a favorite of Mussolini’s, who liked to cast himself as the founder of “New Rome.” He gave replicas of the Capitoline Wolf to many U.S. cities called “Rome” as a gesture of goodwill c. 1929-1931. We don’t know where Brinkley got his copy from, but Brinkley visited Italy in 1925 (where he received a medical degree from the University of Pavia, later rescinded). He was quite enamoured of Italian culture and especially Mussolini himself.

Incidentally, the Capitoline Wolf was traditionally thought to be an Etruscan work from the 5th century B.C., with the twins added in the 15th century A.D., but recent scholarship and carbon dating have established pretty certainly that the sculpture is from between the 11th and 12th centuries A.D.