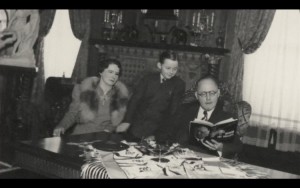 Look closely and you’ll see that Minnie’s eyes have been scribbled out in blue pen. Weird. We looked into the book Brinkley is reading; it’s Behind the Ballots, a 1938 memoir written by James Farley, an influential New Deal politician. I’m not sure why he’s posing with it, as Brinkley was vehemently opposed to almost everything the New Deal stood for. He liked to pay lip service to the idea of government helping the poor, at least when he was running for governor during the Depression. But Brinkley’s real beliefs, stated over and over, were of the “men need to pull themselves up” variety.

However, Farley was born very poor around the same time as Brinkley, and by the 1930s he had risen to earn the title of “political kingmaker”; perhaps Brinkley simply appreciated the enormous power Farley had gained. Anyway, none of this is important.