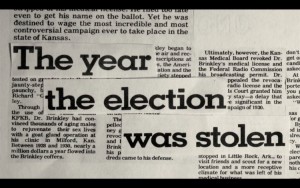 “Had Kansas voters really elected Dr. Brinkley in 1920? Harry Woodring, the man sworn in as governor, some 18 years later told researcher Francis W. Schruben: ‘If you would ask my honest opinion, I would say, yes. . . ‘” (Reardon 26).

However, in our opinion, Reardon may be overtstating the certainty of the issue; Shruben himself wrote that this question has been debated “for six decades” and is far from settled (236).