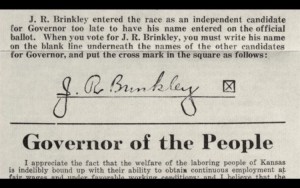 Various stories exist about exactly when and how Brinkley came to this decision.

"In September, 1930, while still smarting from the embarrassment he had suffered in the state of Kansas, Brinkley flew his family to Florida for a vacation. On the way back he stopped in Little Rock, Ark., to visit friends and scout for a new location and a more receptive climate for what was left of his medical business. His friend, Dr. L.L. Marshall, president of the Arkasas Medical Board, had some advice for him on his future: 'Why the hell don't you go back up there and get on your radio and become a candidate for governor?" ("The Year The Election Was Stolen," James Reardon, The Kansas City Star, Kansas City, Mo., Nov. 7, 1982); cf., "With his medical practice under attack . . . H.G. Hotchkiss, a skillful publicist . . . strongly suggested that Brinkley take the offensive and for governor." (“The Wizard of Milford,” Francis Shruben, Kansas History 14 (winter 1991-1992) p. 232); cf., "Brinkley had never considered state politics before because he was pleased with the wealth he was earning through his medical practice. But when he arrived at the airport to take off, a reporter asked him about his future. He impulsively responded, 'Why I think I'll go back up to Kansas and get on my radio and get myself elected governor'" (Lee, 116).