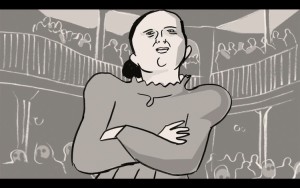 According to Brock, about thirty Brinkley supporters took the stand, but mostly they talked about was how much they loved Medical Question Box.

"Mrs. Bertha Lacey, one of the doctor's most loyal 'lady fans,' testified first. In the patient style of a kindergarten teacher she explained to the commission how Medical Question Box worked: 'You just listen over the radio to waht the other ladies [write] about their symptons, and you'd be awful dumb if you didn't know what was the matter with you.' Until Compound No. 150 came into her life, she herself had been a martyr to constipation; now she had all ten members of her family on it. 'It is not only good,' she said, 'it is wonderful.' In all about thirty of Brinkley's admirers took the stand, including members of his radio staff" (Brock, 145-146).