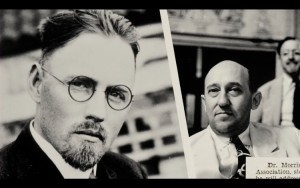 Basically true, but to call it “Fishbein’s campaign” is somewhat of a distortion. Yes, Fishbein worked hard to take Brinkley down starting in 1928, but he was hardly the sole mastermind we kind of make him out to be. Many others had an interest in “attacking” Brinkley, notably the “Kansas City Star.” The “Star” ran many negative stories about Brinkley beginning in 1930, either because they wanted to educate the public about what a fraud he was or because their own radio station, WDAF, was nowhere near as successful as Brinkley’s KFKB, or perhaps it was a combination of both motives. Newspaper columnist William Allen White wrote many anti-Brinkley editorials in the Emporia Gazette, describing his supporters as a “great seething moronic underworld” that could be taught to read and write, but not to think.

And that’s only a couple of examples of the many persons and institutions that came after Brinkley over his long career.

Regardless, for the sake of simplicity and to create a tighter narrative with a clearer hero/villain structure, we will continue to imply throughout the film that all the bad things that happen to Brinkley come largely because of a personal vendetta undertaken by Fishbein, a powerful and connected person.