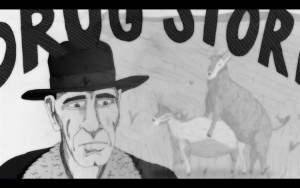 This is the origin story of the goat gland procedure, as told by Brinkley and repeated ever since. Portions of this story and photos of Stittsworth and his son Billy appeared in newspapers all over the country as early as 1920. The Stittsworths also “starred” in and often appeared in person with a promotional film made in 1922 or 1923. However, there are many reasons to not believe this version of the story. Here are some of them:

The whole scene: (Brock, 28-30); (Lee, 30-1); (Flower, 17). Stittsworth on payroll: "Local Authors Study Goat Gland Phenomena," The Hays Daily News, 18 Jun 1976, Fri, Page 5; (Lee, 32); (Wood, 93-100 ); (Lee, 32). Stittsworths appearing with the film: advertisements for this can be found in many newspapers in 1922-3; for example: "World's First Goat Gland Baby and its Father [advertisement]" Oakland Tribune, 21 Oct 1922, Page 26. Brinkley's story changes: cf., "Dr. Brinkley began his experiments in gland-transplanting upon animals in the year 1911, three years before the European War, using goats, sheep, and guinea-pigs as his subjects." (Flower, 17) as compared to all other accounts. Stopped goat gland surgeries in 1933: see Brinkley's own testimony, "The Case of Brinkley v. Fishbein", Journal of the American Medical Association, May 13, 1939, Volume 112, No. 19, p. 1958. PR and Mosnat: Lee says that Brinkley first sought the services of an "advertising man" in the winter of 1918 (34-5) and that he employed "several public relations men, as they are now termed, who dreamed up promotional schemes for him" over the years (45-6); One of the people he hired, probably in 1919, was H.R. Mosnat. See some of his work here: "Doc Brinkley's Cinch," H.R. Mosnat, Fort Scott Daily Tribune and Fort Scott Daily Monitor, 27 Dec 1919, Page 1. We love the way Brock renders this scene: "Surprisingly, Mosnat seems to have arrived knowing nothing about Brinkley's practice – at least that's how they both remembered it – but the moment he heard he leaped to his feet. 'By God, we've got it! Dr. Brinkley, you've got a million dollars within your hands!' On the drive out to Stittsworth's farm, Mosnat gazed at the world like a man in love . . . He and Stittsworth had a conference by the pump and then, his pockets stuffed with notes, Mosnat caught the next train back to Kansas City to map his campaign. It was a fateful moment, for even more than the goat-gland racket itself, it was the doctor's determination to advertise that put him on a collision course with the AMA. The organization had forbidden any advertising by its members (Brinkley then was one) . . . " (Brock, 33-4). Examples of the same story being placed in numerous newspapers: 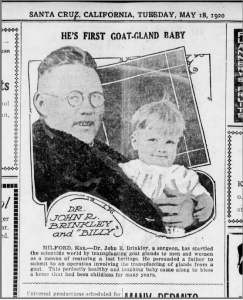 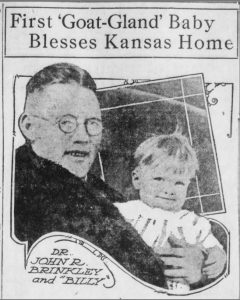 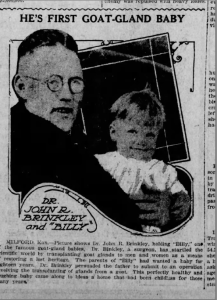 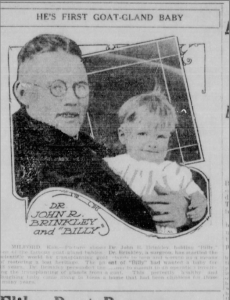 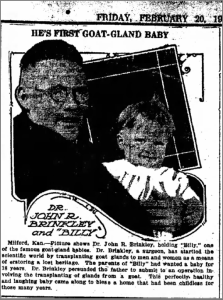