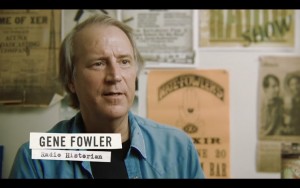 Gene Fowler is not exactly a “radio historian,” although the reason we interviewed him was because he co-authored a book called Border Radio containing a section on Brinkley. It might be more fair to call him a Texas historian. Or a storyteller. Or a collector of odd Americana, mostly from Texas and often involving radio and eccentric characters.