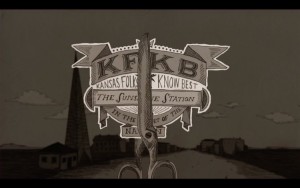 "In 1927 . . . Brinkley noted in a form letter to his supporters, his station could now be heard anywhere in North America" (Lee, 69). "By 1928, at 5 kilowatts, KFKB was one of North America's most powerful radio stations." Godfrey, Donald. Historical Dictionary of American Radio, p. 53 "Although Milford was but a tiny hamlet west of the present day Fort Riley, connected by a dirt road to Junction City, its radio station KFKB was one of the most powerful in the United States, blanketing the area between the Rockies and the Mississippi, but extending far beyond." Scot Powe, L.A. American Broadcasting and the First Amendment. p. 23 "In 1927, Brinkley successfully appealed to the Federal Radio Commission to increase KFKB's power from 1,000 watts to 5,000 watts, winning out over WDAF, a competing station owned by the Kansas City (Missouri) Star. KFKB became one of the most powerful stations in the nation." Dary, David. Frontier Medicine. p. 295