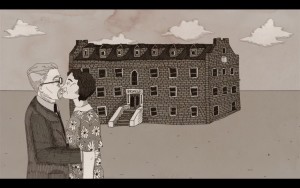 This drawing is based on photos of Brinkley’s second hospital in Milford, which he built sometime in the 1920s. The first one, which would be more accurate to this moment in time, looks too much like a house and not enough like a hospital. Also, that first hospital was called the Brinkley-Jones Hospital (Jones being the name of one of Minnie’s relatives, who apparently co-invested in the place), and we didn’t want to confuse things with that title.

All sources we've consulted are pretty vague about when the two hospitals were built; Brock references the second hospital on as following an event that took place in 1921 (51), and Lee writes "as business increased, Brinkley built a larger hospital, which would allow him to process fifty patients a week" (58). Photo of the second Brinkley Hospital, which we are referencing: 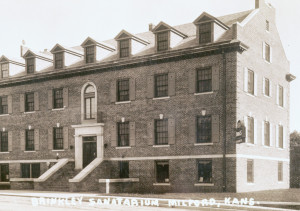 Photo of the first hospital, the Brinkley-Jones Hospital: 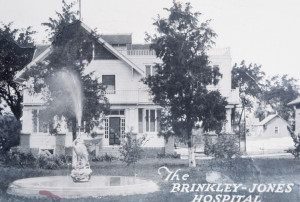 As an aside, a small news item about the Brinkley-Jones Hospital in 1923 raves about how astonishingly beautiful it is, created with "only the best materials and workmanship" ("Fine Decorating Job," The Junction City Daily Union, 10 Jan 1923, Wed, Page 2)