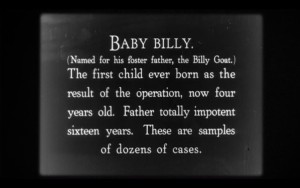 It seems more likely that Billy was named after his father, whose name (Bill) isn’t mentioned in this promotional film.

Images taken from a fake science film called “Rejuvenation Through Gland Transplanting” which Brinkley almost certainly paid for and then distributed to movie theaters all over the U.S. Stittsworth and son toured with the film in person as “proof” of the operation’s efficacy.