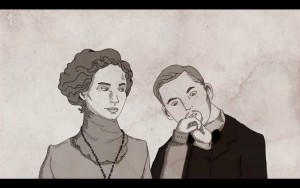 All true (they married August 23, 1913), but actually this was his second marriage. His first marriage was to Sally Wike on January 27, 1907. According to Wood, Brinkley met Sally Wike at the funeral for his Aunt Sally. Since Aunt Sally died on December 25, 1906, that would make their courtship pretty brief: about one month. Again according to Wood, this marriage produced three daughters and ended when Sally left him.