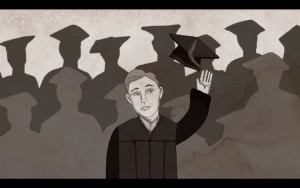 “On May 7, 1915, the Eclectic Medical University of Kansas City presented him with a certificate signed by its president, Dr. Date R. Alexander. To become an alumnus of E.M.U. (later described in court proceedings as ‘vague, obliging and long defunct’) cost Brinkley one hundred dollars and got him licensed in eight states” (Brock, 25). So: yes, he had this diploma (and a number of other diplomas and accreditations), but it doesn’t mean what you might think it means.

On a separate note, the narrator claims here that he received this diploma in 1917, and then married Minnie, and then moved to Milford all in the same year. This is not chronologically accurate; we’re compressing these events (and leaving a lot out) for flow and clarity. 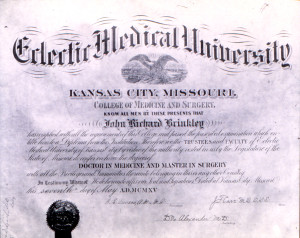